A few Sundays ago, my wife and I headed down the interstate from Raleigh to Charlotte to do a little IKEA shopping. But that wasn't the only reason we made the two and half hour drive. In a small but extremely hip and growing neighborhood just north of downtown known as NoDa, four food & beverage establishments are owned by my dear friend Jamie Brown (@jamie_making) and her husband Jeff Tonidandel.

I first met Jamie on a blistering hot Tucson, Arizona day in August 2002. My wife and I had just relocated to the area so I could get my MBA at the U. of Arizona. Prior to the start of the program, I enrolled in a week-long math refresher course. There were about 20 others also enrolled, including Jamie. That first week, we all got to know each other very well, hanging out at lunch and in the evenings. Most of us were all relos from around the country. Jamie, a Pittsburgh native, was about two years removed from her undergrad at Davidson College, a small school about 30 minutes north of Charlotte, where she also played for the school's basketball team. She was smart, sociable and compassionate, and immediately became one of the central figures of our MBA class, graduating with a concentration in marketing.

I decided to go back for my MBA after four years developing software because I knew I wanted to eventually run my own business. My plan was to meet other likeminded people and leave Arizona with a business of my own. During the two year MBA, I excelled in my classwork, working hard to maintain a perfect 4.0 GPA. More importantly, I partnered with three others in the Entrepreneurship program to develop a competition-winning business plan for a culinary incubator where home cooks could launch their own food businesses. Between the four of us, we shared a common passion for cooking and focused our energies on business ideas in that arena. But when graduation came around, we agreed to abandon the idea and go our separate ways, back to the real world "working for the man".

With a few close friends and a first cousin and his wife living in Raleigh, North Carolina, my wife and I decided to move back east to Raleigh to start the next chapter of our lives. Jamie decided to return to the Charlotte area where she would eventually marry Jeff, another Davidson grad. When we left Arizona, Jamie gave us a few things to ship back east, so just weeks after we parted, Jamie and Jeff visited with us in Raleigh to get her things and grab lunch at Chili's. Who knew when we first met that we'd end up living in the same state after graduation.

So at the time, I couldn't have imagined it would be 15 years until we would see each other again, but then life happened. My wife and I got jobs, bought a house, got a dog, then had a baby...and another baby, all within 3 years. To say the next decade was busy would be a gross understatement. I got wrapped up in my job which lasted 7 years, then another short job, and then another (my current job of 5+ years). My entrepreneurial dreams went on hiatus.

Jamie went to work for Lance Inc. and Jeff for NASCAR, but eventually they decided to put their careers on hold and backpack around Europe. When they returned, their lives would change directions dramatically when Jeff told Jamie he knew what he wanted to do. A year later, in the middle of the recession of 2009, they opened their first restaurant, Crepe Cellar Kitchen and Pub, a European gastro pub. Times where tough and Jamie and Jeff were expecting their first child. But they persevered and eventually doubled the restaurant's space, and in 2010, opened Growlers Pour House right next door.

Then in 2016, they struck gold again opening Haberdish just down the block. This is the place where Jamie and I would finally reunite after all these years. The restaurant is truly homegrown, with much of the fixtures and food from local merchants.

And the menu is southern comfort at its best. We ate well! An appetizer special salad of thick slab bacon, creamy coleslaw, and homemade pepper jelly and peanut butter. Homemade pickles with the perfect balance of acid and snap. Hush puppies fried golden brown and crunchy on the outside and super moist on the inside, like the best cornbread possible. Kale salad with orange slices and crumbled goat cheese. Crispy and moist fried chicken, their most popular dish. Sweet potato gnocchi, a dish adapted from Jeff's mom's pumpkin gnocchi recipe. And the prettiest looking cocktails. 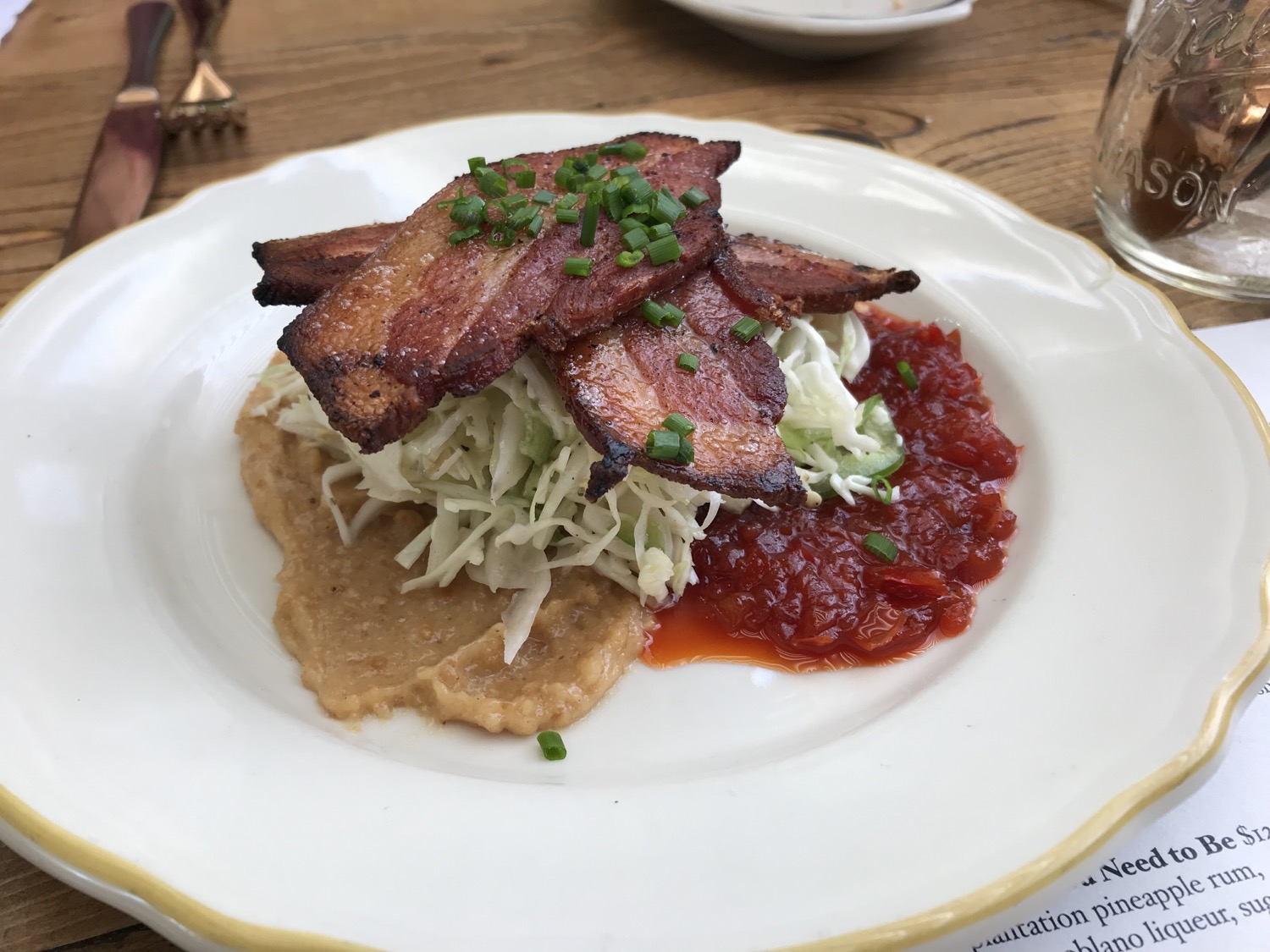 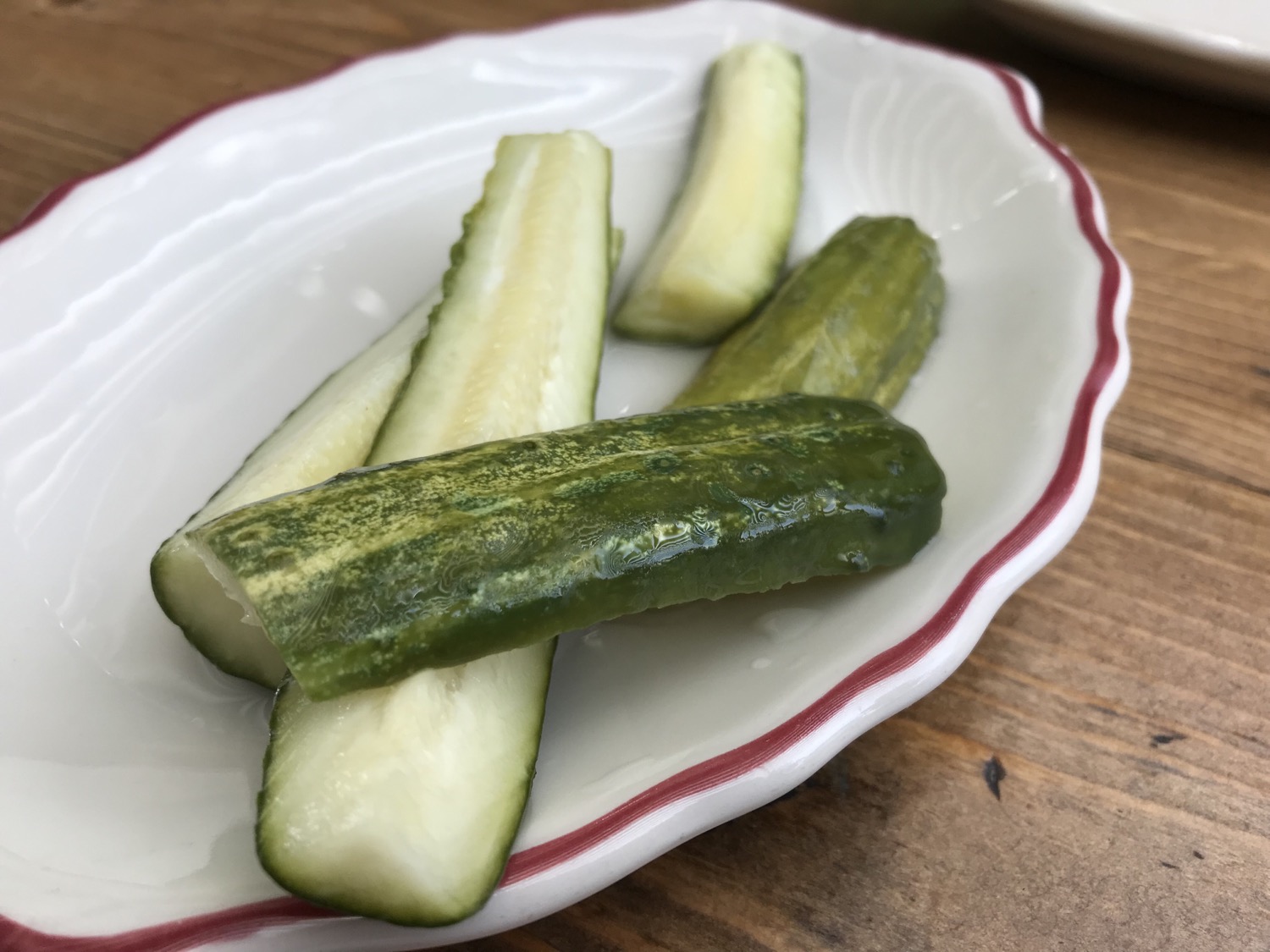 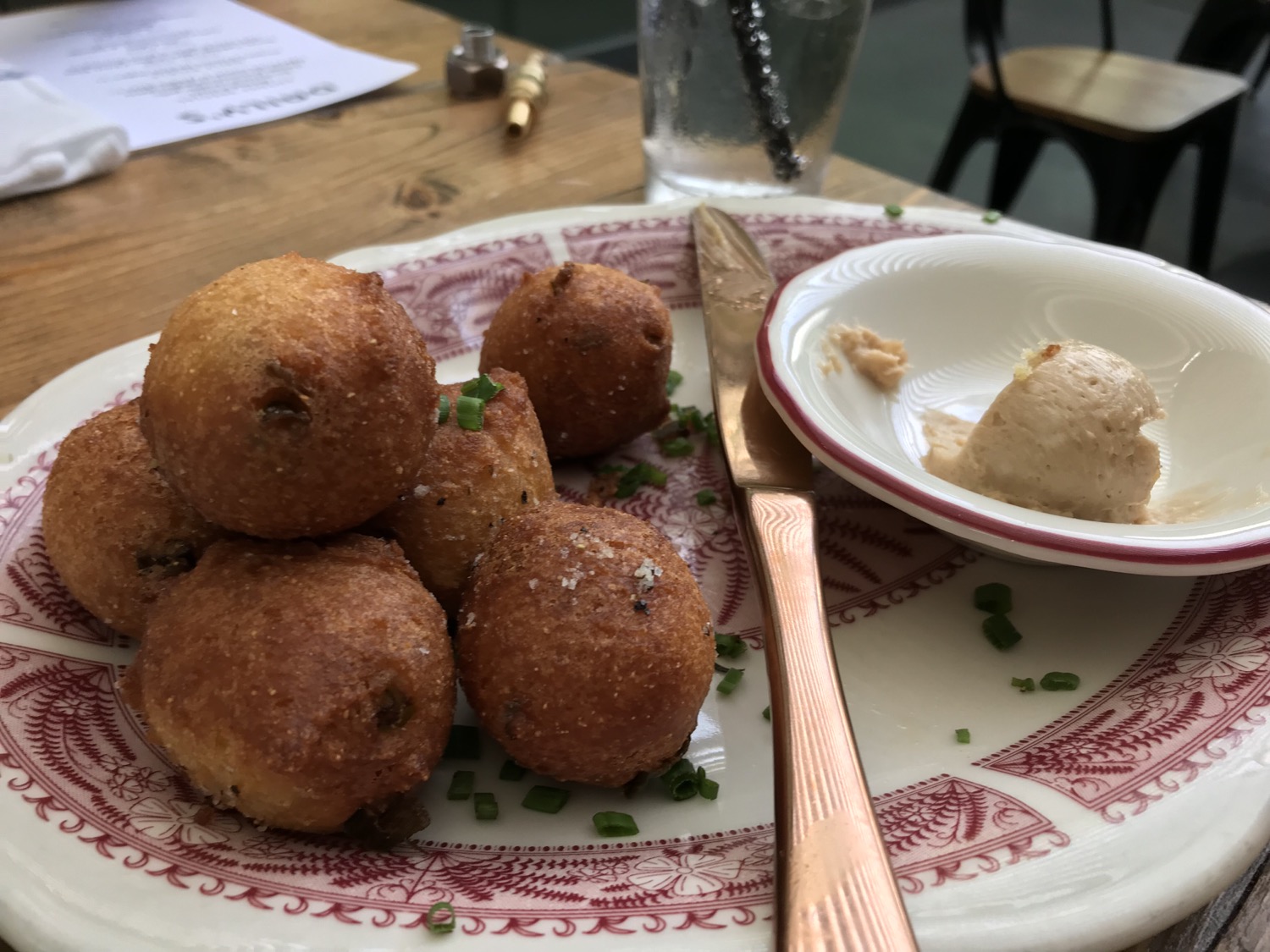 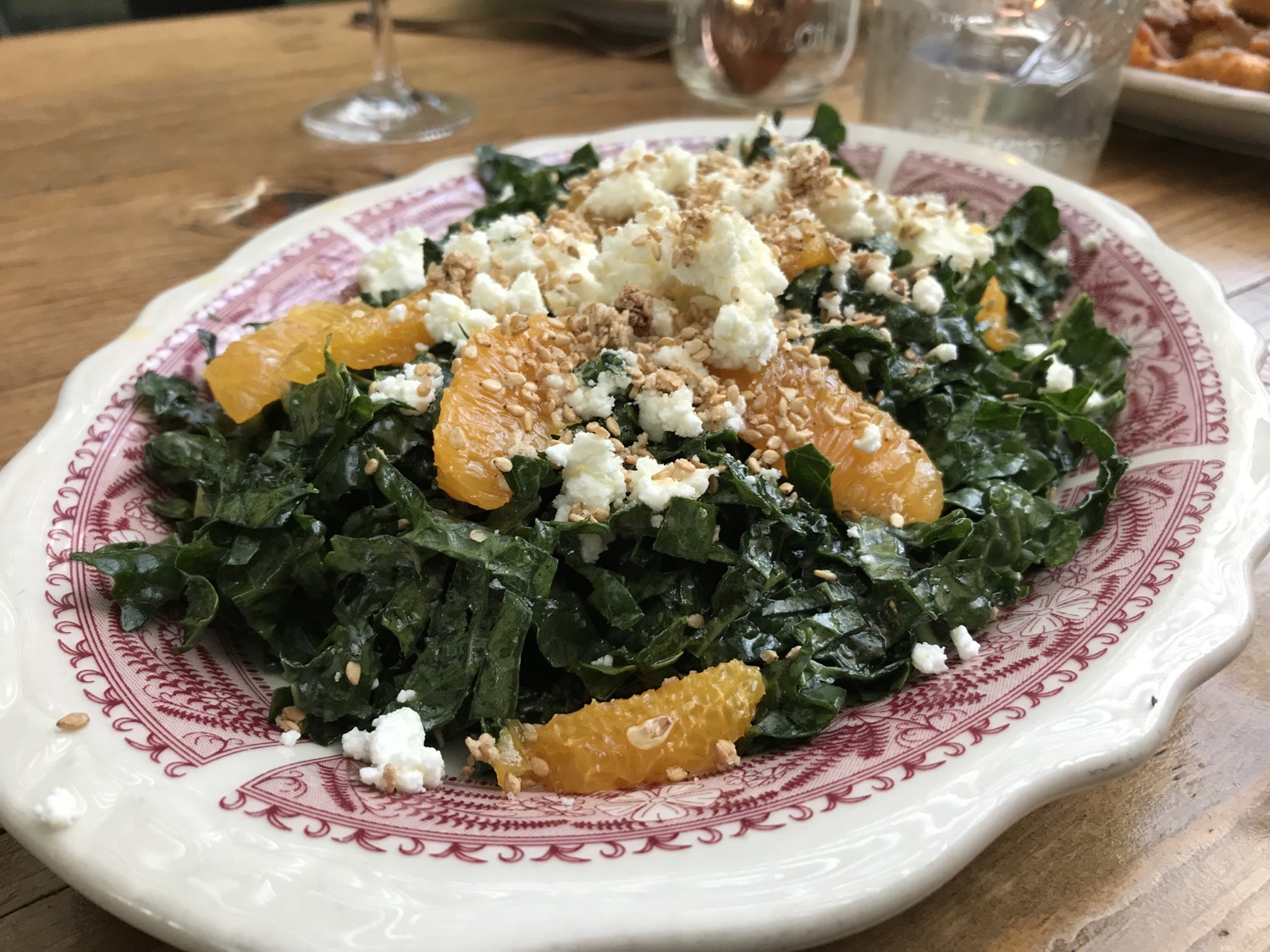 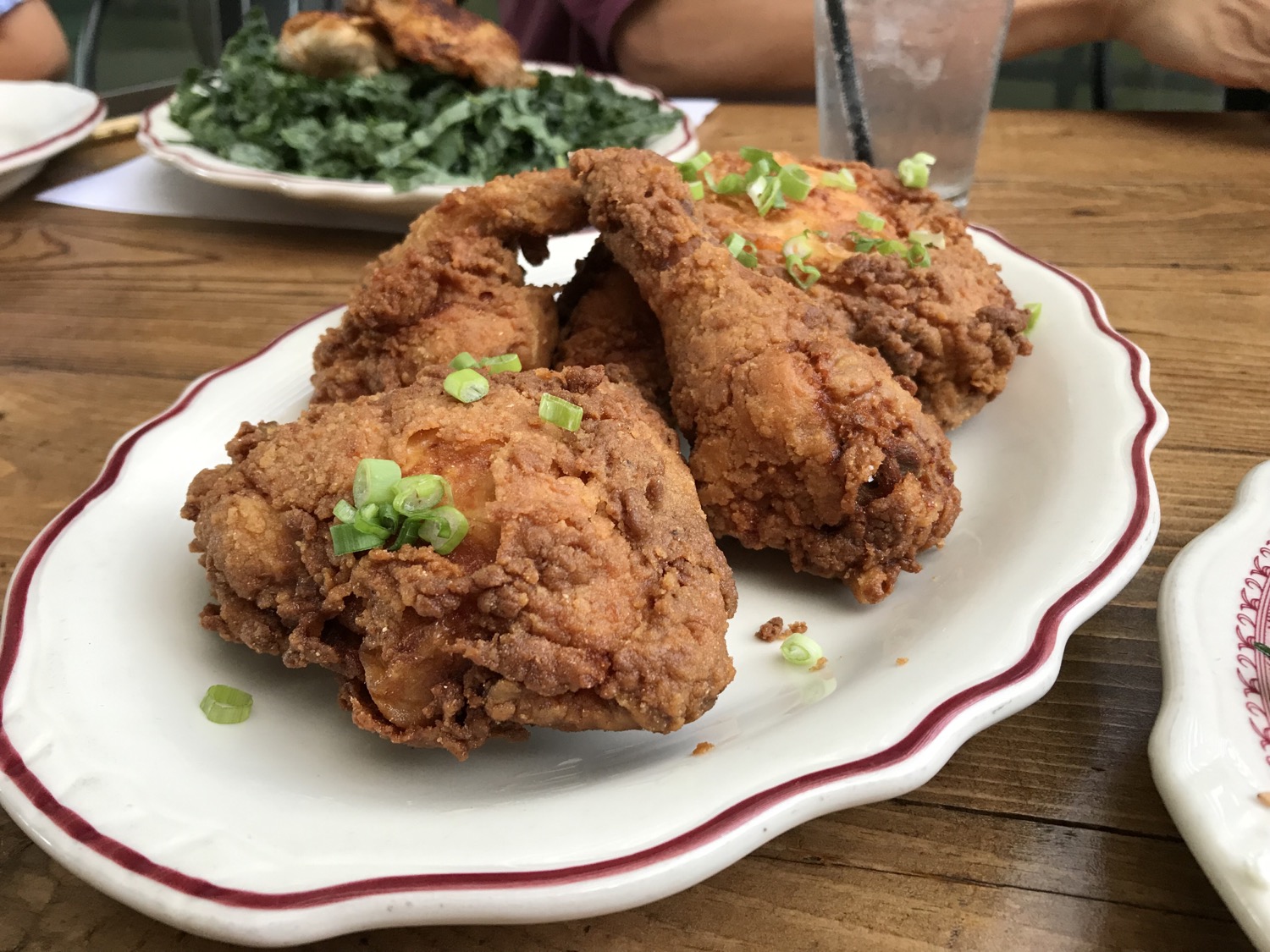 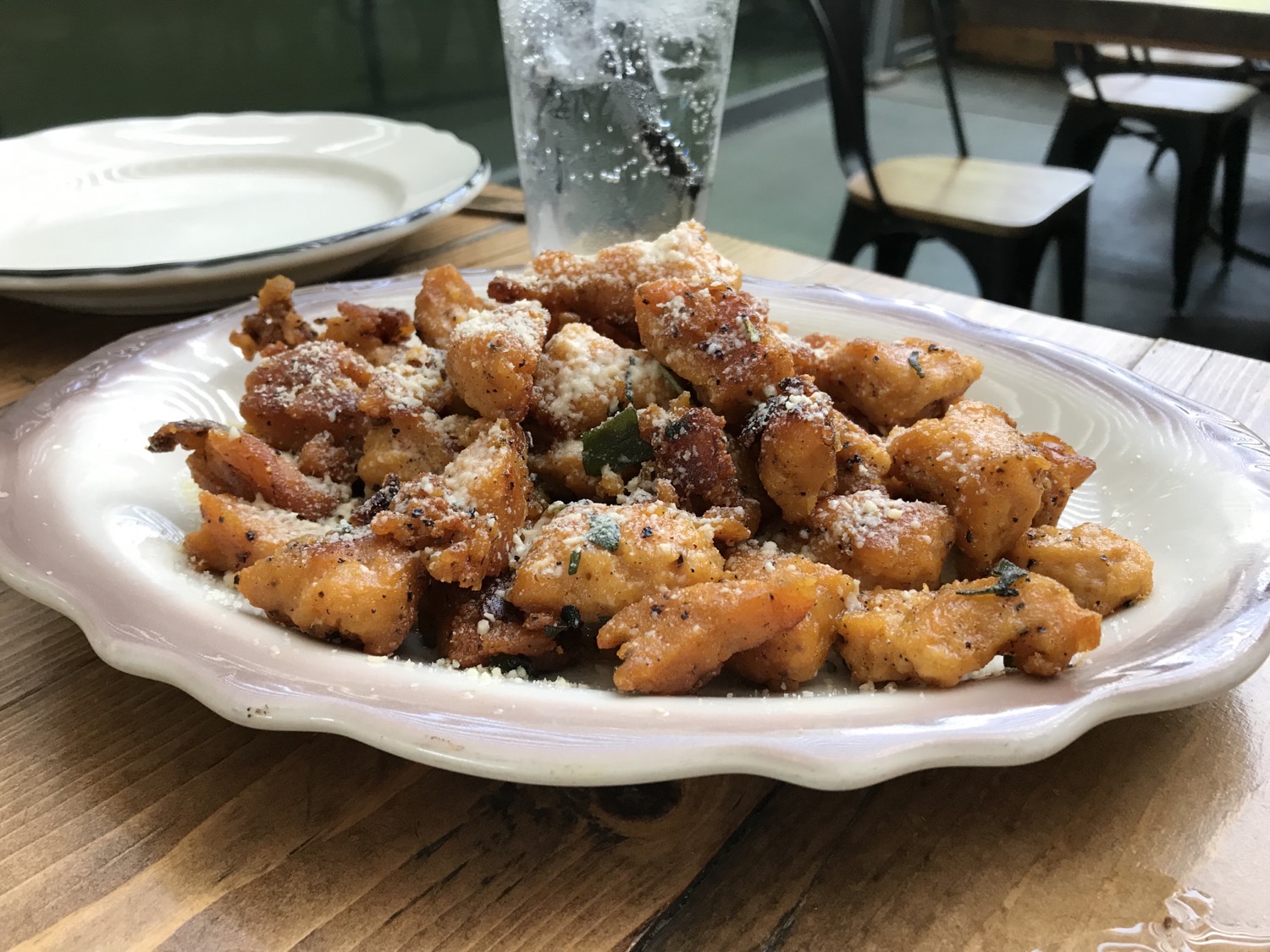 This place was truly special, where friends and family gather to enjoy each other's company in a warm and unassuming setting.

But that wasn't the end of their restaurant adventure or our evening. After dinner we walked around the corner to their literal "hole in the wall" donut shop Reigning Doughnuts. They opened this place last year, converting some storage space into a shop that sells cake donuts decorated and dipped in all sorts of yummy toppings, including seasonal specials.

On this night, I had a simple, yet delicious chocolate and sprinkle dipped donut, while my wife had a honey glazed donut. It was the perfect ending to a delicious culinary evening.

Oh, and Jamie and Jeff aren't done yet. We're already looking forward to heading back to Charlotte next year to eat at their newest venture Supperland, which will reside in an old church in the Plaza Midwood neighborhood of Charlotte.

Driving home that night, the irony was not lost on me. In 2002, I went to Arizona looking for business partners. I loved food and had considered going to culinary school instead of business school. I partnered up on a solid business idea for a food-related business, but in the end, returned to a life of working for others. But I continue to dream (that's why I started hecancook.com last year).

Meanwhile, here is my fellow classmate and friend I'll have for life, just down the road from me, doing these amazing entrepreneurial things with food. You might say I'm a little bit jealous. But much MUCH more than that, I'm extremely proud of my friend Jamie Brown. I knew back in 2002 she was destined for something great, and she's proving me right. I didn't even mention that in addition to these restaurants, she and her friend also launched Bea is for Business, a series of books and classroom curriculum about a young entrepreneurial girl, that teach children how to be entrepreneurs. I've read them all with my oldest as she was growing up and they are amazing.

That night also left me more motivated than ever to figure it out. To figure out what it will take to one day control my own destiny, and hopefully to do it with food, the thing I'm most passionate about (aside from my kids).

So what are you waiting for? Get yourself to Charlotte now and enjoy all the amazing food Jamie and Jeff and cooking up! Here's some more ways to learn about their story:

See you soon Jamie and Jeff!